The Cairns Ukulele Festival caravan is well and truly in motion with the announcement of another international ukulele artist, and a new tour that will take ukulele fanatics to the reef on their private ukulele cruise boat. 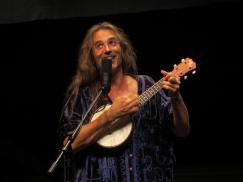 The Cairns Ukulele Festival is delighted to announce Los Angeles-based ukulele star Ukulele Bartt, one of the international ukulele community’s most enthusiastic, engaging and productive musicians. Bartt is the creator of the popular website, Bartt.net, with lessons, song charts, videos, and an online ukulele store featuring his instructional DVDs, CDs and books.

Ukulele Bartt Warburton is recognised around the world for his “Fancy Fingers” workshops and his dazzling musical performances. The Los Angeles Times calls him a “modern-day master.” In addition to his playing prowess, he is equally acclaimed for being as much fun as you can have with four strings. “Jumpin’ Jim” Beloff – author and publisher of the biggest range of ukulele books in the world, calls Bartt “a fearless uke player who combines his significant chops and wacky sense of humor to teach uke basics, as well as much more advanced techniques.”

Bartt will be the host of this year’s Eddy Finn Ukulele Mystery Tour, which will take to the seas of the Pacific Ocean, taking the punters to a new destination this year. The Cairns Ukulele Festival has chartered a catamaran which will be filled ukulele players who will be playing, jamming, enjoying concerts and a workshop by Ukulele Bartt and other headliners as well as doing some sightseeing.

“I’ll be rocking out to some Flamenco and Classical, and a bunch of my own romantic songs. Mozart and Beethoven will probably be involved, too. I love jamming on rock oldies with the other performers at festivals, so I’m pretty sure we’ll do some of that. I might sing “Zombie Love Song,” or “Pluck You,” or go with the mushy love stuff. We might even do a sing-along in Italian. I like to play it by ear and see what happens!” Bookings for this tour have opened and festival organiser Gaby Thomasz warns, “the Eddy Finn Ukulele Mystery Tour has a limited capacity and sells out every year, so please grab your ticket for this brand new festival experience now and don’t miss out on the early bird price”.

Bartt will also be performing during the festival’s Ukulele Party Night and conducting several workshops on the Saturday and Sunday mornings of the festival.

For more information on the tour and a booking link, please click here.

Travel writer Helen Pitt reviews the 2013 Cairns Ukulele Festival in a full-page article: “In Australia, the Everest of uke fests is the Cairns International…Perhaps it’s the tropical backdrop, and the fact it’s held every winter when many want to escape the colder climes, but this is as close to Oahu as Australia gets.” For the full article, follow this link.

The Cairns Ukulele Festival is proud to announce it took out the Cairns Post’s Hit Award for “Best Festival or Major Event” this year. We’d like to thank all who voted and those who contributed to the festival!